Riding the Wave of Affirmation

Six years ago, when we arrived in Burundi this group of medical graduates was just beginning their training. Over the past six years HAU has graduated about 300 medical students, but this particular group stands out.   They were the ones who were just beginning their training when we arrived and Randy was unexpectedly, given the role of Dean of the medical school.  For him there has been a special connection with this group as he’s shepherded them through six years of classes, clinical training, obstacles, finances, failures and successes.  Graduation days are always events of great pride for all concerned but this one had more personal investment due to this unique connection.

Together with colleagues from our sister team at Kibuye, other professors from HAU, dignitaries of the Free Methodist Church, the Ministry of Education, and proud parents and guests, we assembled to award and witness the graduation of over 600 students from a variety of departments.  For most this was a very long awaited day, representing many hurdles that had been overcome.  One student I had taught in an English graduate class a year ago stopped me for a photo.  She had come from Rwanda on a bus, 36 weeks pregnant, just to take my Advanced English class,  so she could finish her graduate nursing degree.  Now, a year later, she had completed all her requirements for a master’s in nursing.  She showed me the photo of her son, who was born shortly after the class I’d taught, then took my picture to show her family.  Just one such encounter makes all the hardship pale in comparison to the joy realized. 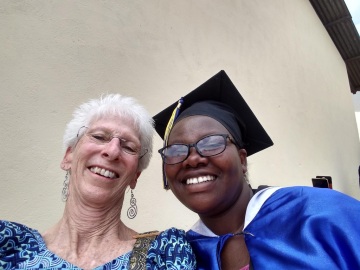 While the actual day of graduation, full of its pomp and circumstance was grand.  The next day’s  party for the medical graduates was by far “the icing on the cake”.  The students handled all the arrangements for the event (location, food, program) within the budget that had been given them.  Their camaraderie and community spirit were evident in every detail of the evening.  They gave time to honor those who had particularly aided them in their education from the librarian to professors to Kibuye doctors.  They wrote a special song about malaria, played a question/answer game with the different tables, featured one of their own who sings and plays guitar.  There was even a surprise wedding proposal during the program as one young man got down on his knee in the middle of the floor to pop the question to one of the graduates!  The young lady said “yes!”,  Of course, with the crowd of friends cheered her on. 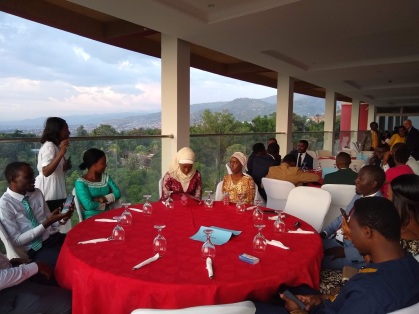 Even with all this, the highlight was when the graduates honored Randy by lifting him up for an impromptu crowd-surfing and African dance.  It was a demonstration of their affection, appreciation and honor to him and the fact that they knew he would take it in good fun a further testimony to their mutual amity.

As he said to them in his speech, their success has been his success and he is with them in his heart.  He sent them out with this commissioning “to whom much is given, much is expected”, and as they have been given much by many who have contributed to their education, they can  go, serve, and care for the sick and needy of their countries. 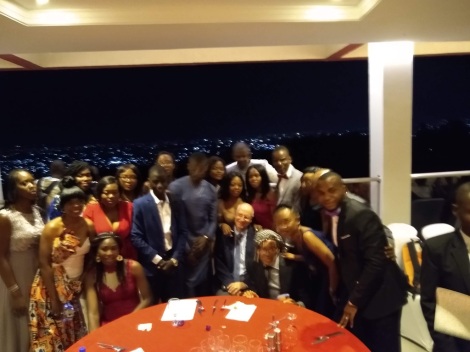 It’s moments like these that give us perspective and affirm our call to this place.   Our day-to-day work has a bigger impact in its cumulative effect.  Often it’s more than we can see. But these graduates reinforce why we came to HAU in Burundi, and why we continue; which is to train up a generation of leaders with capacity, integrity and compassion.  We stand with all those who have enabled them along this way, cheering them on as they go to do greater things.  Congratulations graduates!  Well done!