A Hike Up Mt. Heha

Most Saturdays are quiet “at home” days for us, to catch up on undone work of the week or plan for the next week’s classes. Recently, a friend of ours organized a Saturday hike to the highest mountain in Burundi, Mt. Heha (elevation 8,759 ft). I was ready to join like a bee to honey, especially because this friend, Dan, was born in Burundi and speaks Kirundi (very handy when your going into the interior). My “other half” preferred the usual Saturday “stay at home”. (couch-potatoe!) As it turned out just three of us were able to get away for that day, but it was such a great adventure that we decided to try to make it a monthly outing

Burundi is a country full of “mountains”, although they seem more like hills because Lake Tanganyika is already at 3,000 feet. We were assured it would not be a strenuous hike because it had just a 300 ft. elevation from where we would park the car. Most of the climbing was in the car on the 1½ hour drive there. Heading east from the capital Bujumbura we twisted and turned up the paved road for about 45 minutes, through a few small villages, then headed out one of the dirt road for another 45 minutes. I was really thankful Dan knew where he was headed and had a GPS to verify he was going in the right direction 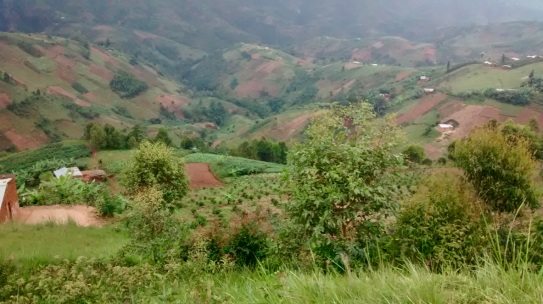 Parking the car at a bend in the road with a wide, flat place, we found it was a station on some sort where the local men were loading different products in to the back of cars or trucks to take to Bujumbura to sell. Dan was able to verify with them that we were in the right place. We started up, past several plots with the traditional round huts mixed with the more modern square brick homes being careful to step on the goat trails rather than through their gardens. 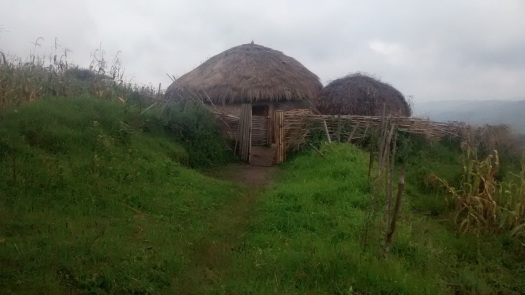 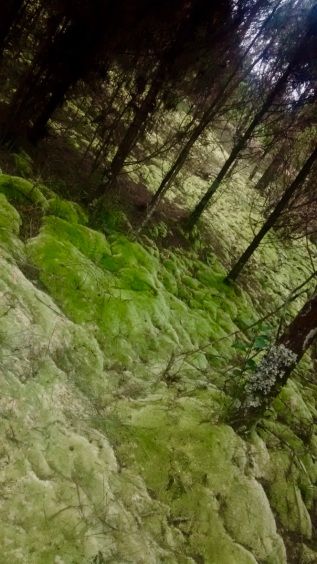 We quickly found ourselves in some of the strangest flora and fauna I’ve seen in Burundi. Nearly the whole hike was covered with small pine trees—a more recent import that was initiated as an alternative to the eucalyptus trees brought in earlier. There were large carpets of bright green mosses growing under the pine trees along with ferns and wild orchids. Since we didn’t know what to expect we really didn’t have any preconceived ideas, this made the discoveries along the way all the more interesting and softened the blow that on reaching the “top” we couldn’t see a view due to the growth of pines in all directions. In fact, all we found at the top were two large holes dug into the ground perhaps for mining something. As we headed back to the car it occurred to me that the process of getting to the top was so much more interesting than the actual “top of the mountain”—how profoundly like life that is. 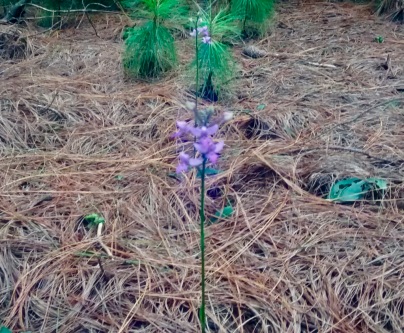 At the top of Mt. Heha

Since it was only noon, and not raining, Dan suggested we take the “back road” to his coffee washing station and return to Bujumbura by a different route. After asking a few people on the road if it was passable (sure, on two feet!) he was game to try especially since he had 4-wheel drive. We were in! The road was mostly passable but there were more than a few sketchy places. One patch in particular called for Dan to get out of the car to figure out just how to maneuver it, not only did it have huge ruts from a large truck but it was on a 90 degree curve with a log bridge at the bottom just after the curve. Pictures don’t do it justice. But Dan placed the tires on top of the dirt between the ruts and slide down it, catching the turn and fishtailing it across the log bride as if he drove it every day. The drive was an adventure, to be sure! Dan was an excellent driver and tour guide. It’s hard to describe or even show in pictures just how steep the hills are here and yet they are farmed from bottom to top. Having this opportunity to travel literally across country caused me again to appreciate just how beautiful Burundi is. 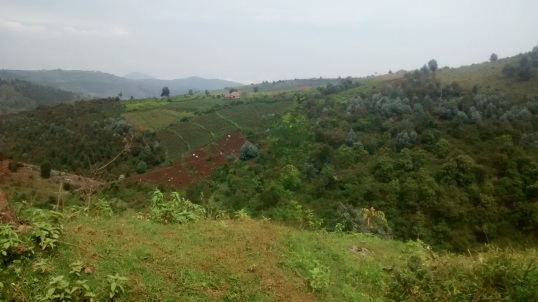 After about an hour of excitement on the dirt road we reached the coffee washing station. It’s coffee harvesting time so the washing station is just beginning to get underway. Dan walked us all around it, explaining the process of washing the beans, the different washing tanks, the separation of the different sizes of beans and the different processes of drying them (it’s way more complicated than I imagined!). He and his local Burundian partner have created jobs for the people in this area and want to help the farmers expand coffee production. Eventually they hope to build an eco-lodge on the location and expand into essential oil production as well. They have picked a beautiful location with 360 views of the beautiful Burundi hills.

Last stop on our way back to Bujumbura was the Livingstone Stone, a large rock with Livingstone’s name chiseled into it. Some come here to take a picture, others to ask for what they can get from the picture takers. It was a quick stop, not nearly as interesting as everything else we’d see that day.

I returned home renewed in appreciation for the beauty of Burundi and inspired by our friend’s entrepreneurship and commitment to Burundi. It was one of the better Saturdays I’ve had and I’ve glad I didn’t stay home.