The Making of a Planter Box

Posted on October 5, 2015 by carolynjbond 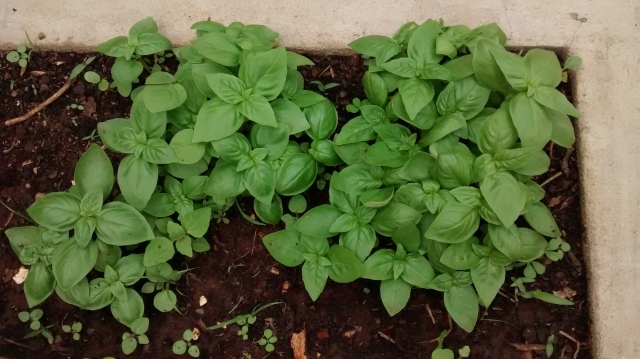 “Try to leave things better than you found them.” This was a motto I grew up with and for good or ill passed onto my own children. I hope it will be part of the legacy I leave in my life in general but also specifically here in Burundi where we now live. Some days it’s difficult to know if I’ve added anything, have made anything better or just caused more confusion and been more trouble or work for someone. But here is the story of one thing that seems to be better on several levels.

Sizing up the work.

The house we live in has a lot of concrete around it along with two patches of grass and several planted areas of large scrubs. I have wanted to grow some herbs and flowers but there seemed to be no good place to do so. I was going to resort to buying cement planter boxes when Gilbert, the man who works for us suggested building a planter box around the base of the water tank. This spot was just gravel with a cement walkway. Not an eye-soar but not anything to look at either. So I asked him how much such a thing would cost and who could do it, not sure if I wanted to enter into a project that had lots of potential to turn sour or costly. He quickly figured up a rough estimate but said he’s call the mason to come give a bid. Meanwhile, I sought the permission from the landlord.

The next day the mason and his worker arrived to give an estimate for the work, bricks, sand and cement. To match the bricks already used in the yard would be a bit extra, of course. To have them carried into the yard would also be a bit more, of course. But the total price was much less than I’d expected (about $60); the price of three cement boxes. But more importantly, everyone was looking for work after the difficult economic times of the past six months of political crises so this could benefit others on several levels. When the landlord gave approval, it was “a go”.

First, five hundred bricks arrived via two little yellow tuk-tuks (three-wheeled taxis that sound like a lawn-mower). Four men carried them from the street into the yard stacking them in neat piles in very hot weather. They seemed surprised but very grateful to receive large cups of cold water before leaving. Then the sand arrived, carried in on someone’s head, dumped in a pile two or three times. Next, I was to purchase a bag of cement, so Gilbert and I drove to the street in town that specializes in cement where I gave him the money and he returned to the car with a 25 kg sack of cement. All was in place and ready for the work to begin. 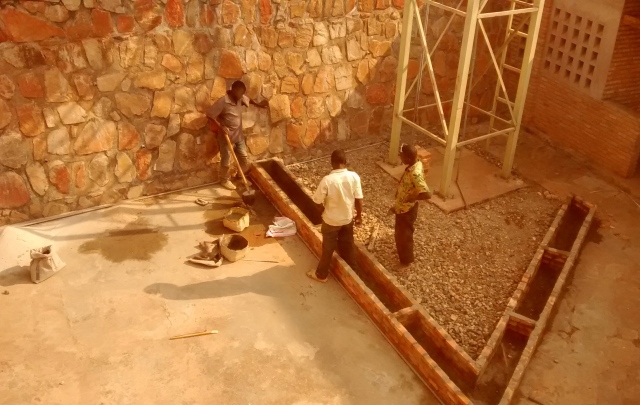 Near the end of day one.

During the construction we also had the negotiation over the soil to fill the planter. A few days after the planter was finished and dried, two women arrived, babies on their backs, bags of soil on their heads.   They began filling the planter with black earth. Each trip took them nearly an hour to go and return by foot. When they were finished and I went to pay the mason, who had arranged it all, he told me they were the wives of he and his worker. I paid him the price we had negotiated but then found the women outside our gate and “tipped” them for their work. “I’ve paid you for the soil and work, but this is theirs”, I said through Gilbert, my interpreter. The mason laughed and agreed. Since then I have seen these same women working other construction jobs on our street (which seems to have a burst of building going on). They smile at me and wave their free hands while carrying sacks of dirt, sand or rocks on their heads. They have no idea how much respect I have for them.

The women bringing the dirt.

The planter box is an improvement over the bare gravel area. The herb and flower seeds have been planted and are beginning to sprout. Providing work for others was beneficial for them. Experiencing their industriousness and integrity was beneficial to me. The positive cross-cultural human interaction we shared has left all of us better for it; more ready to extend dignity and kindness to others. 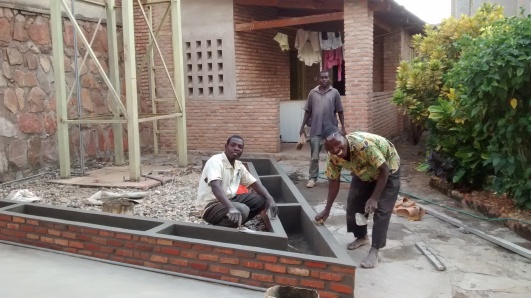 I’m very glad Gilbert made the suggestion to build a planter box!  And very excited to finally have some herbs growing! 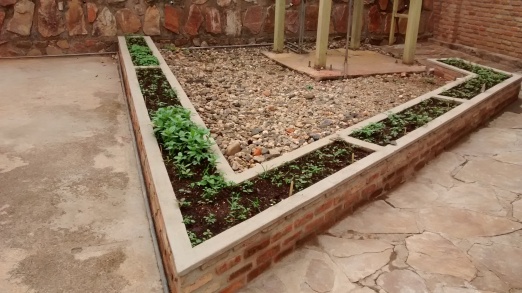 4 Responses to The Making of a Planter Box