Standing on the Shoulders of Giants

Vacations are usually relaxing and overdue, well earned and critically needed; at least for type A, over-conscientious people.   Our first week in France really met the need to relax, disengage from all the stress and tension of the political uncertainties in Burundi and enjoy many good things. We were thankful to have our “out of Burundi” time begin there.

Since then we have spent nearly a week in Virginia, one in Canada and two in Washington. It’s been great to spend time with family, friends and share with supporters about the work in Burundi while also enjoying great roads, fast internet and long days of summer sunlight. We continue to read in the news of the ongoing political tensions leading up to elections, now moved to the 21st of July, praying, hoping it will be peaceful and we can return on July 23rd. 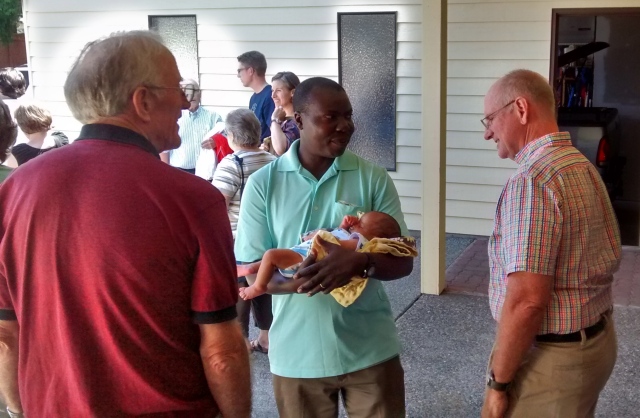 Randy talking to Issac who is holding one of his new sons.

As we’ve been in the Seattle area where many of the supporters and original missionaries to Burundi live (particularly the medical work) Randy offered to give a report of the progress of the medical school. Last week we were able to gather with these “giants of the faith” who began the good work at Kibuye and HAU. A surprising and wonderful addition was that one of the first graduates of the medical school, Issac and his wife, Rachel, were also there with their five week old twins! We realize again how we stand on the shoulders of giants. The small, daily, continuous things we do—teaching, scheduling, organizing, reassuring, being present in Burundi living among the students—bears fruit that often can only be seen in the long-range perspective. 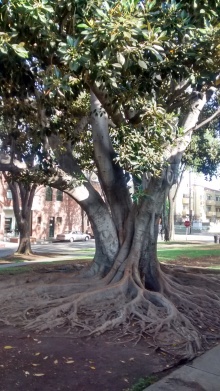 It was a blessing to be among so many faithful servants who have gone before and tell them of the progress of the medical school. They also were thankful for the continued work in the areas they had labored in for so many years. There are moments in time that we get a glimpse of just how big and far reaching is God’s work in a particular place and that we are just a very small part of something far, far grander that we could ever imagine. Much like the grander of an enormous tree, grown slowly over time, bearing good fruit and greater effects than any can know or count.  Being encouraged we look forward to returning to Burundi next week, Lord willing!

1 Response to Standing on the Shoulders of Giants