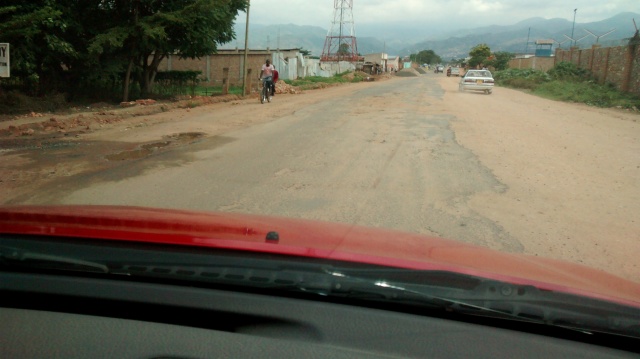 This road has so many potholes people often drive on the shoulder.

There are many here! At any one time while you’re driving there are cars, trucks, people walking, bikes, motorcycles, people pushing bikes with all sorts of heavy loads on them, all going at different speeds and different directions.

Oh, and then there’s the road itself filled with potholes of various sizes and in random places. The joke here is the only people to drive straight are those who are drunk because everyone else is weaving down the road avoiding potholes, people and all sorts of obstacles. It’s not “if” you will have an accident but “when”.  My “when” came last week. 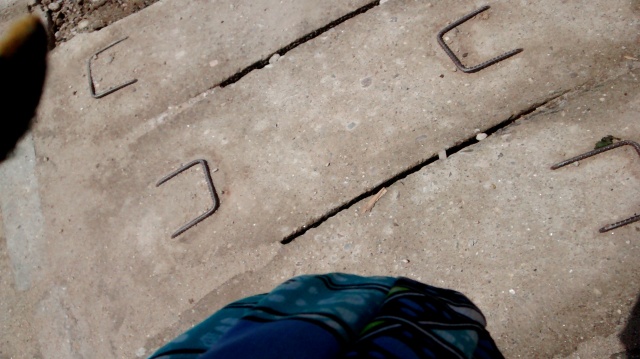 Storm drain covers over the street.

There are a large number of streets undergoing renovations as storm drains on either side of the roads are being renovated.  There are places where the drainage transverses the street so it is covered over by large cement rectangles.  The other day I was driving in an area where there’s a lot of delivery trucks and there’s a lot of road renovation happening too. After waiting for the intersection to clear I turned the corner, avoiding the parked car at my right and drove smack into a place where the large rectangle cover was missing! The five or six men standing at the corner began yelling for me to stop and pointing at my right front tire. Not that I could go anywhere with my wheel in a large hole.   At first I thought I’d hit a pothole but leaning over to look out the window I saw this gaping hole, which had consumed my tire. How could I have not seen that? (See the above for the possible explanation but I think it was the parked car blocking the view of the road.) 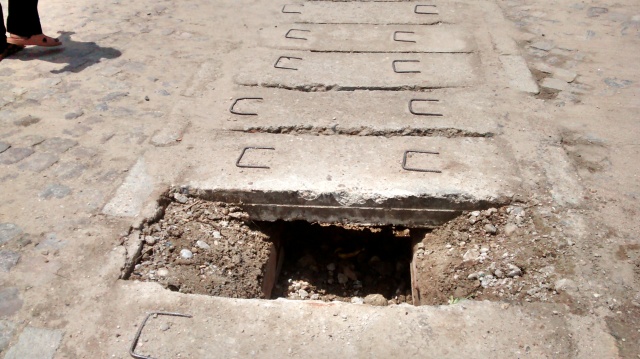 One man took the lead (helping the old lady in distress), he beckoned me gently to move forward to the side, guiding me so that my back tire would not suffer the same fate. I got out to look at the damage. Not only was the tire flat, something sharp had cut the tire beyond repair. In my limited French I understood him to say they would change the tire. In less than 5 minutes they took out the spare, jacked up the car, exchanged the tire and put the spare back in the trunk. (too fast for me to even get a picture!) By this time, my other lady friends who were at another shop while I was” parking the car”, came to meet me. With a quick, cool assessment of the situation one friend quickly called her husband to ask how much we should pay and to whom because there were nearly 10 men “helping” at this point. His wise counsel proved valuable, “pay the one man in charge 10,000BF  (roughly $6) and he can divide it up”. Fumbling to find some smaller bills we paid the man who had guided me out of the hole. I kept asking “Où est le couvert?” (where is the cover?) pointing at the hole. Another man said, “Tomorrow, tomorrow” and then he asked for money (weren’t we giving it out?). 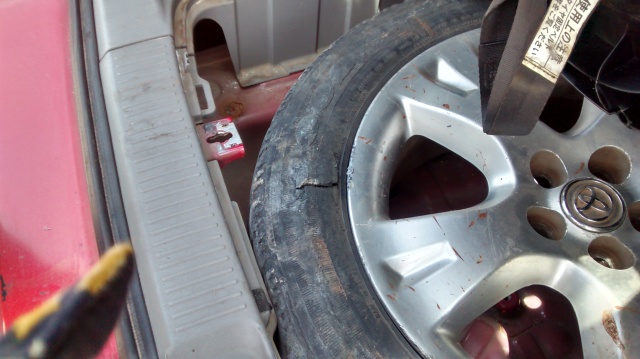 Wounded tire already back in the trunk.

As we got into the car to drive away the party of men who had helped were ordering lunch at the snack shop located on the corner, with lots of laughter and back slapping. I couldn’t help but wonder if I’d been duped by the “missing cover” rather than ignorant of seeing the hole.  How could I think such a thing?  But even as I was dwelling on this I was reminded  that I was not alone when this all took place, these men were so helpful and polite and all was done with only minor inconvenience. With some attitude adjustment I let go of those questioning thoughts and instead was thankful.   They were just taking advantage of their good fortune to be able to give a little help (which comes so naturally to many Burundians) and receive a good lunch for it. We were both blessed and our Father had supplied all we both needed through each other.

Since then I have noticed other places around the city where covers are missing, so it’s really more of a common occurrence than I had thought.  It’s just another hazard to be looking out for when driving!