Posted on September 14, 2014 by carolynjbond

Burundi doesn’t often make the news. As a very small, poor country that lives in the shadow of Rwanda, most people haven’t even heard of it. When it does make the news it’s not only because something of negative noteworthiness has happened but something big enough to move Burundi to the front of the line of negative news over other terrible happenings in the world. Such was the case this past week.

The noteworthy event was the violent slaying of three elderly, Italian nuns in a neighborhood of our city, Bujumbura.    http://www.reuters.com/article/2014/09/08/us-burundi-italy-nuns-idUSKBN0H30TC20140908  Confusion and rumor have run rampant all week, as authorities have been trying to get a handle on what happen, how and why. They detained several people and have now arrested someone but who knows if it is the guilty person. Even so, it does not change the horrific nature of the crime, the outright shock felt by all who hear of it, the grief for the lives taken and the questions of justice that rattle us to the core. Added to all this injury is the further distortion of Burundi’s already negative reputation. Even in the short articles about the tragedy the only other thing said about Burundi was that it was one of the poorest countries of the world and still struggling after twelve years of civil war, leaving the impression that it is a place of anarchy, ruthlessness and lawlessness, which is not the case in our experience.

Precipitated by this report, I have grappled this week with my own heart issues of fear and questions of justice.  As I have, these words from a song keep coming to my mind, “I have told you these things that you might have peace. In the world you will have trouble. But take heart!  I have overcome the world.” (John 16:33) These were words Jesus spoke to his followers on the night before he was to be violently and brutally crucified. This was not a platitude Jesus was speaking, but a deep reality he knew as he was walking into the culminating act of his life.   He spoke “these things” to his friends seeking to impart to them the same unshakeable faith and hope, to see beyond the tragedy to the deeper truth. This event has caused me to again dig deeper into what “these things” have to say to me in light of the reality of where I live.

Meditating this week on the chapters of John’s gospel, 14-17, I have not found answers to this tragedy but I have found comfort and reassurance from a bigger perspective of truth that is not defined by human actions.  I have found the presence of the One who has been there as a recipient of hate, injustice and evil, and yet, has come out on the other side.   Jesus promised his followers that he would not leave them orphans in the world but would send his Spirit to comfort them, guide them and testify to them that all he said was true.  So too, he promises me. As he prayed for them to not be taken out of the world but to testify to the world of his love, forgiveness and abiding presence.  So too, he prays for me to not be taken out of Burundi but to testify to his presence and love by continuing to be here; abiding in his accomplishment of overcoming the world by rising from the dead. 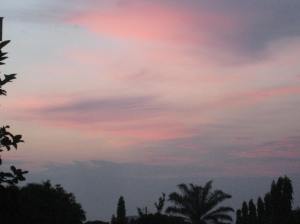 1 Response to But Take Heart!