April 23rd classes at H.A.U. were cancelled and the University was closed for the first Memorial Day to the late Bishop/Rector Elie Buconyori, founder of H.A.U. One year ago, on Easter Sunday of 2013, this beloved Burundian died due to prostate cancer. He was only in his early sixties but had done so much for his country, people, and the church that he was honored on the same scale as a president or other great hero.

He has been buried near the University campus on the site of the student’s church. There is a tiled and fenced tomb that now has his picture hanging on all four sides. On this first Memorial Day there were open tented seating areas set up all around the tomb for the ceremony to honor and give tribute to this hero.

There were several speeches given. The first by his widow, Joy, as she bravely shared about the life of the man she loved and was married to. The family presented the picture they had chosen to adorn the tomb site (a common practice in many places in Africa for a great leader).  The interim rector Rev. Bates spoke and the Bishop of the Free Methodist Church—it now takes two people to do the job Bishop Elie did on his own. There were also songs and dances performed by the several church choirs. 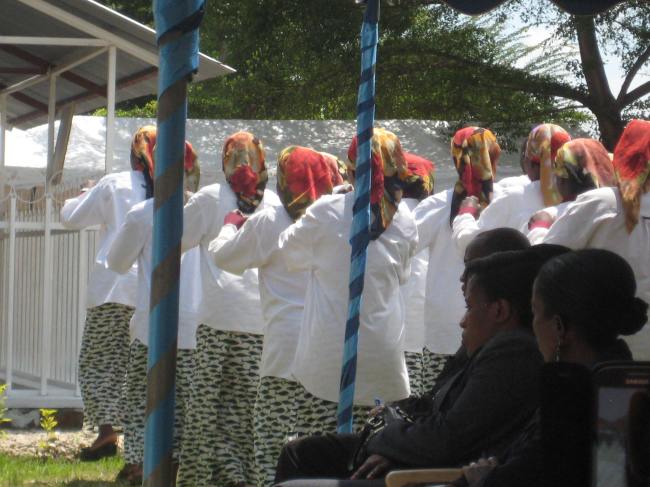 Since the whole service was done in Kirundi (the mother tongue of Burundi) I didn’t understand the messages that were being given but I know there was much agreement on how great he was, how much he was loved and what a visionary he had been. At one point, a man in bright white clothes with red and green sashes spoke. He walked around, gesturing and pointing.  People were laughing at some of the things he said. I guess he was the comic relief. I sure wish I could have understood him.

Even the First Lady, the President of Burundi wife, prayed and spoke during the ceremony. She is also a student at H.A.U. working on a Master’s in the Theology Dept.   She knew Bishop Elie personally and spoke very highly of him.

The service ended with many different groups presenting flowers and placing them around the tomb. 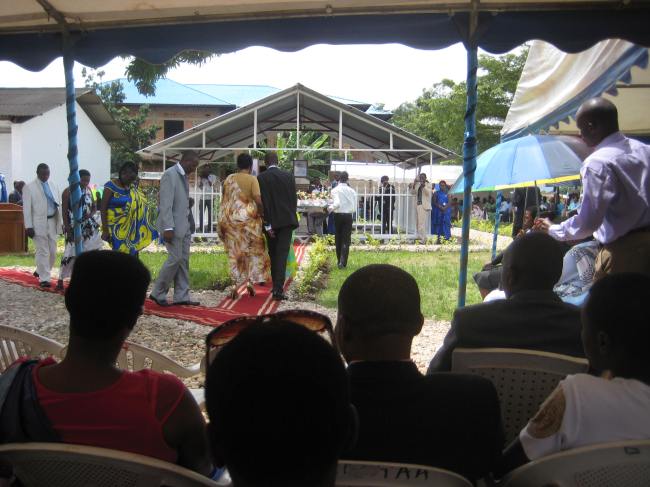 In April of 2012, when we came to Burundi for the first time, it was Bishop Elie who welcomed us and then invited us to be a part of H.A.U. He personally took us around the University, to his home for dinner, in his car to Kibuye, the mission hospital three hours away, where our sister team of physicians works caring for patients and educating medical students, and then to the airport for our departure. Though our time with him was limited, it was evident just being in his presence what a man of faith and vision he was, with great humility and a heart of servanthood. It is another mystery of the Almighty’s, where His ways are not ours and we are left with ache and confusion, trying to understand why He would take such an extraordinary man from the earth so soon. So it is a very good thing to have this annual day to remember and honor Bishop Elie and thank God for such a hero.

If you’d like to read more about this great man and the many ways he served and lived for others here are links to what two others have written about him:  mccropders.blogspot.com/2013/04/a-hero-fallen-remembering-bishop-elie.html  and missionaries.fmcusa.org/miller/2014/04/30/remembering-a-visionary-leader

1 Response to Honoring a Hero