Sub-title:  The truth about learning French for me.

Here’s a picture that depicts Randy’s experience here at French school.  Since he was put into a more advanced class based on the initial evaluation done when we arrived he says this is how he feels. . .

like he’s trying to drink from a fire hose.  It has been humbling for him.  He’s contemplated moving back to my debutantes class.  He’s hired a tutor to help him fill in the gaps of what he missed that the other students in his class learned through the fall.  He’s been doing all the lessons in our beginning A-1 book on his own.  After the first two months he’s beginning to understand more of what’s said and is able to ask questions in stores and function.  I think he’s doing really well despite his often time frustration. 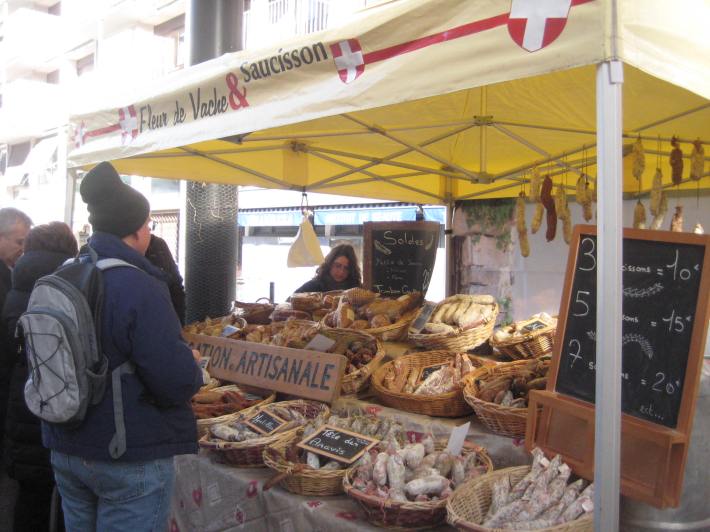 Randy using his french to buying local sausage at the Saturday market.

On the other hand, this picture depicts how I’m often feeling. . .

Truth be told I have avoided writing about our language learning because I’ve been so overwhelmed that I didn’t think I’d have anything positive to say.  But then last week I had to share a devotional in my class of ten.  (This first time we can do it in English, next time we have to do it in French!)  It gave me the opportunity to revisit the story of how I got to where I am and why.   This is the story I shared . . .

Jesus and the paralyzed man

This picture depicts the story from Mark 2: 1-12 of Jesus healing the paralyzed man.   Four men carried a paralyzed man on a mat to a house where Jesus was teaching.  When they couldn’t get into the house because it was so crowded with people they went up to the roof, made a hole in the roof and lowered the man down on his mat right in front of Jesus.  Seeing their faith, Jesus said to the man, “Son, your sins are forgiven.”  The religious leaders who were present were thinking in their minds “Why does he talk like this.  He’s blaspheming.  Who can forgive sins but God alone.”  Jesus knowing what they were thinking said to them aloud, “Why are you thinking these things.  Which is easier to say your sins are forgiven or get up, take up your mat and go home.  But so that you will know the Son of Man has authority on earth to forgive sins.”  He turned to the man and said, “Get up, take up your mat and go home.”   The man got up, took his mat and walked out in full view of them all.  All were amazed and praised God and said, “We have seen amazing things today!”

So what does this have to do with my learning French?  I shared this story because I found it encapsulated some of the process God has used in my life to get me to French language school.

First, there is the paralyzed man.  I said I felt like that man because I have an infirmity as well that no one can fix.  It’s called “being language challenged”.  Though not an official disease some of us are truly language impaired when it comes to having the aptitude for hearing and speaking other languages.  I have known this for most of my adult life and so I’ve avoided learning another language, although I love the idea of it.  But I know if I am to live in Burundi I want to be able to communicate with those I live and work among.

Then there were the four bearers of the man, helpless to do anything but bring him to Jesus.  They knew they couldn’t do anything but they believed Jesus could.   For me these have been you, the people who are lifting me up in prayer and giving me encouragement.  Without your bringing me to Jesus I would not be here.  It is your praying for me that brought me to this place and keeps me from giving up.  (I am humbled and grateful.)

Next there are those scoffers, who are thinking, “just who does this guy think he is?”  I identify with them because I find myself in unbelief and lacking faith.  Jesus reminds me that he has the authority to do the greater thing—forgive me for my wrongs—can he not also help me to do this smaller thing—preserver and learn to speak this language?  So he says to me, “Pick up your books, open your mouth and trust me.”  As I told my fellow classmates they are seeing a miracle everyday with me being there in class, like those who were in the house that day amazed.  Learning a language is hard for everyone but for me believing I can learn a language and being here to work on it is a miracle.  So thank you dear friends who have carried me to the One who alone has the authority to do all things.  One day you too will see (hear) amazing things when you hear me speaking french!

The view one morning on the way to school. A reminder to keep looking up!

3 Responses to Seeing A Miracle Everyday