Posted on August 1, 2012 by carolynjbond

Malawi, like two-thirds of the world’s cultures, is an oral culture.  That means that people  in this culture prefer to communicate through the spoken word rather than through the written word.  All cultures began as oral cultures before alphabets, symbols for letters and writing were invented.  Those of us who now grow up and live in very literate cultures may not be aware of our oral roots and how differently we have learned to think, process, retain and communicate information.  We may not understand why the people we are communicating with don’t seem to hold onto the information we’ve given them which is often in written forms or based on written forms.  That’s because we are use to communicating using written strategies rather than oral strategies. 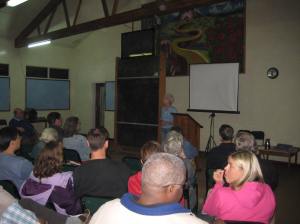 So what would qualify me, a highly literate person whose only been in Malawi for six months, to speak to a group of missionaries who’ve lived here for three to ten years on the subject of “orality” (preferring the spoken word over the written word to communicate and pass on information)?  That’s the question I was struck with when I was asked to participate.  While I love stories, storytelling and have begun to appreciate the role of oral strategies in cross-cultural  communication, I felt way out of my league.  But I couldn’t get away from the fact that I had time, interest and availability, so why not.   I said, “Sure, I’ll do it!”

So last Wednesday we drove two and a half hours north for me to talk about orality at the Spiritual Life Conference for about 30 SIM missionaries.  Thankfully, Jim, who asked me to come, also gave me a great outline for the time, organizing discussion groups ,as well as an example in his own ministry as to how he had incorporated oral strategies.  (I worked with his Sunday School team a while ago–see previous blog entry, Unsung Heroes.)  All the groups shared what oral strategies they  had used thus far and what they others they might try.  It was really exciting to hear what they were already doing–storytelling, dramas, songs, poems, pictures.  It also gave them an opportunity to learn from each other, affirm and strategize together.

The conference site was at the elite Kamuzu Academy, Malawi’s oldest and most prestigious boarding school.  Schools are on holiday so the Academy hosts several groups at a time depending on their size and needs.  SIM was one of three groups there that week.  The grounds were very beautiful.  Rooms were basic, like most dorms, but adequate.   It was wonderful to travel to another part of Malawi and see more its history, cultural heritage and opportunities. 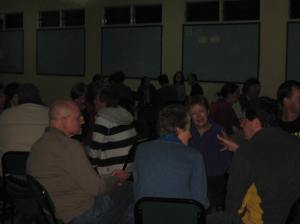 An additional blessing for me was that Randy came with me, even though he had a conference call that night with the US.  We weren’t sure if he’d be able to get internet access but it worked out for them to call him and it was only an hour.  For Randy it meant 24 hours away from the hospital!  I wasn’t sure if it was me he was supporting or just happy for an excuse to get away, either way I was very glad he came!  Beauty and wonder in action!

The trip was not without its misadventures as well, like the pothole I hit driving and the hubcap bounced off.  Thankfully we knew it and were able to turn around and retrieve it.  The second event was the speeding ticket I received for going about 3 miles over the speed limit leaving a small town.  The police “speed trap” seemed to be catching all cars at that spot.  Randy was able to pay the fine right there for 5,000 MK (the equivalent of about $18).  He even got a receipt for it.  Interesting thing is that speeding tickets, no matter how fast over the limit, are a flat 5,000 MK, as is also drunk driving (or so we have been told).  Don’t know what happens if you don’t have the cash on you.  It’s hard to think most people have that amount on them all the time when they are driving.   Even so  the trip was well worth it for the opportunity to meet other people who live and work here, the chance to get away and the challenge of learning more and sharing about orality.

1 Response to The Spoken Word